Massa takes the reins as Alberto and CFK give in

Sworn in as Economy Minister, Sergio Massa took the spotlight as he left the Chamber of Deputies in festive mood. An economy in shambles and runaway inflation, his top priorities. 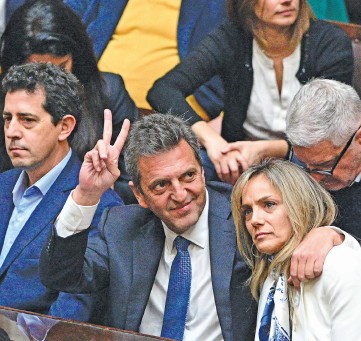 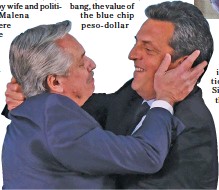 Sergio Massa resigned as President of the Chamber of Deputies and was sworn in as Economy Minister by President Alberto Fernández this week. Massa’s followers led by wife and political partner Malena Galmarini were exultant, to the point where they arrived en masse to the ceremony held in Casa Rosada and chanted partisan songs. The President had been pushed out of the scene while VP Cristina Fernández de Kirchner decided not to participate. It was an odd entrance for Massa who took over the hottest seat in the house. Since former Economy Minister Martín Guzmán left with a bang, the value of the blue chip peso-dollar exchange rate plummeted, causing a series sense of panic and pushing inflation expectations markedly higher. Silvina Batakis lasted less than a month in charge, being sacked while in Washington, DC, where she told IMF Chief Kristalina Georgieva that she counted with the full support of the ruling coalition, of which Massa is one of the major shareholders. Despite the forms, Massa’s festive entrance into the Cabinet was moderately celebrated by the markets, pushing the value of the black market peso-dollar rates down aggressively over the past few weeks but failing to generate the optimism of Wall Street. Massa, who is not an economist but a lawyer with a vast experience in public service, unveiled his team and made a first series of announcements. The new minister began his announcements by pledged himself to meeting the targets in the agreement with the International Monetary Fund (IMF) reached last March , including a fiscal deficit of no more than 2.5 percent of gross domestic product while not printing money beyond one percent of GDP. Massa then went on to uphold the freeze on state employment previously ordered by his predecessor Silvina Batakis. CONTINUES ON PAGE 4